The least corrupt countries are:

The index scores countries  on a scale of zero (highly corrupt) to 100 (clean) with the average score just 43 out of 100.

The countries with the lowest perceived level of public sector corruption – Denmark and New Zealand – had a score of 88. At the opposite end of the index  South Sudan and Somalia scored 12, making them the worst offenders. Syria, Yemen and Venezuela were also among the lowest-scoring countries.

The United States came in 25th with a score of 67, its worst performance since 2012. Transparency International attributes this to its unprecedented $1 trillion Covid-19 relief package which “raised serious anticorruption concerns and marked a significant retreat from longstanding democratic norms promoting accountable government.” 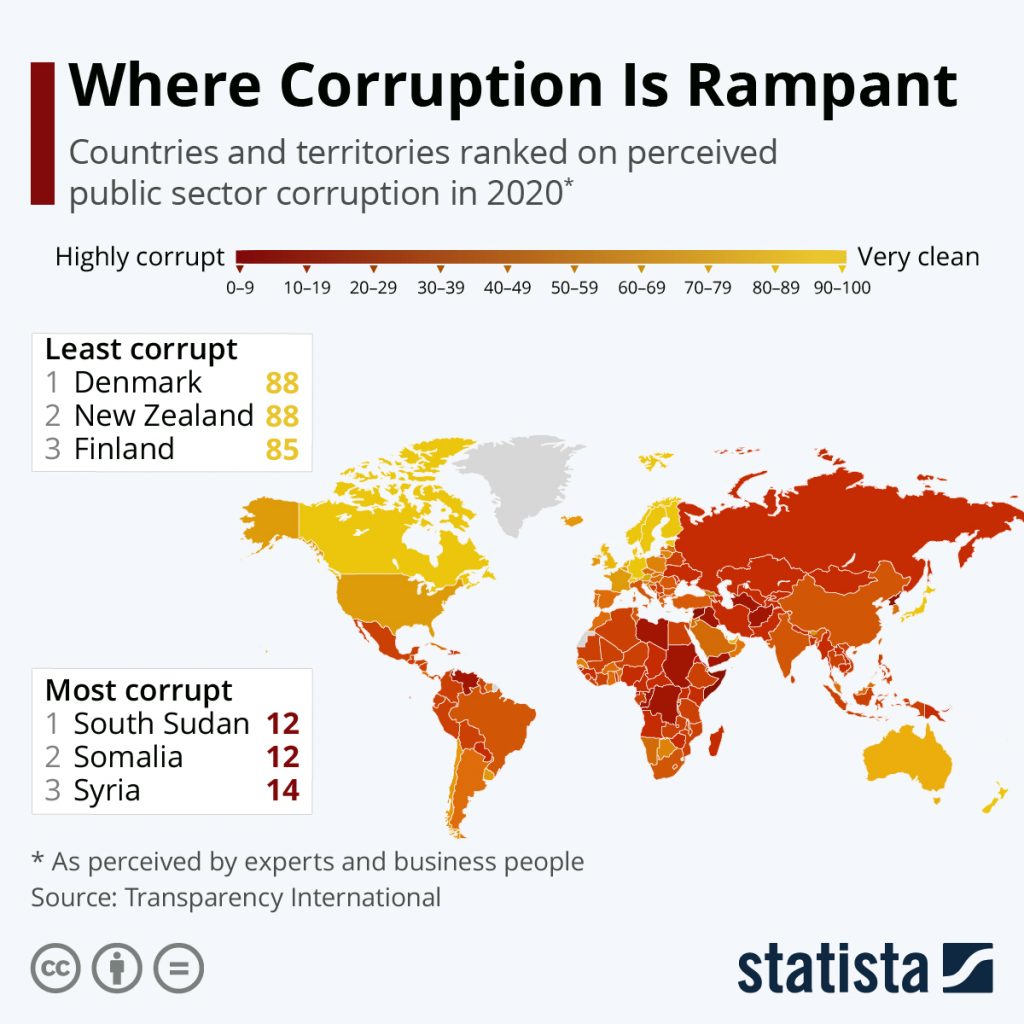 Two thirds of countries scored less than 50. The research found that corruption was rampant across the world in 2020 and that it undermined the response to Covid-19, threatened the global recovery and contributed to democratic backsliding.

Transparency International states that 2020 has shown that Covid-19 is not just a health and economic crisis but also a corruption crisis. When it comes to healthcare in particular, corruption takes many forms such as bribery, embezzlement, overpricing and favoritism.

Reports of corruption have grown since the pandemic broke out and countless lives were lost due to the issue undermining a fair and equitable global response.

Countries with high investment in healthcare tended to perform better in the index with corruption diverting money away from essential services. Governments that saw higher corruption levels, regardless of economic development, tended to invest less in their health systems.

The 3 Prerequisites of a Flexible Workplace

How to Tan a Squirrel Hide For Fly Tying

I’m a Purveyor of Cool, Quality Basics—These 5 Blew Me Away

How to Dry-Brush Your Skin and the Benefits

We will be happy to hear your thoughts

Recent Posts
About us

Pastelblends.com is a participant in the Amazon Services LLC Associates Program, an affiliate advertising program designed to provide a means for sites to earn advertising fees by advertising and linking to Amazon.com

We use cookies to ensure that we give you the best experience on our website. If you continue to use this site we will assume that you are happy with it.
Cookie SettingsAccept All
Manage consent

This website uses cookies to improve your experience while you navigate through the website. Out of these, the cookies that are categorized as necessary are stored on your browser as they are essential for the working of basic functionalities of the website. We also use third-party cookies that help us analyze and understand how you use this website. These cookies will be stored in your browser only with your consent. You also have the option to opt-out of these cookies. But opting out of some of these cookies may affect your browsing experience.
Necessary Always Enabled
Necessary cookies are absolutely essential for the website to function properly. These cookies ensure basic functionalities and security features of the website, anonymously.
Functional
Functional cookies help to perform certain functionalities like sharing the content of the website on social media platforms, collect feedbacks, and other third-party features.
Performance
Performance cookies are used to understand and analyze the key performance indexes of the website which helps in delivering a better user experience for the visitors.
Analytics
Analytical cookies are used to understand how visitors interact with the website. These cookies help provide information on metrics the number of visitors, bounce rate, traffic source, etc.
Advertisement
Advertisement cookies are used to provide visitors with relevant ads and marketing campaigns. These cookies track visitors across websites and collect information to provide customized ads.
Others
Other uncategorized cookies are those that are being analyzed and have not been classified into a category as yet.
SAVE & ACCEPT